The food on our recent trip to Quebec City was a bit unexpected. I had read that Quebec City had become a “foodie” destination, but I wasn’t quite clear why. If you research a trip to the Napa Valley, for instance, you can practically download a brochure on exactly how to become a proper “foodie” — where to go, what to eat, and the appropriately pretentious words to use. In Quebec City, I just started eating and hoped for the best.

For our first dinner, we popped into a cozy-looking spot on a cold night. I was a bit taken aback when we stepped inside. There were snow shoes hanging from the ceiling, wooden beams, and the sense that a hunter might walk in with his still-bleeding trophy head at any time. Yet, there was French refinement, attitude, and language added to the entire endeavor. I would call the ambience French/Alaskan. (Yes, I understand a Canadian would call it “French Canadian,” but I had just been to Alaska, and this is how my brain interpreted things.) 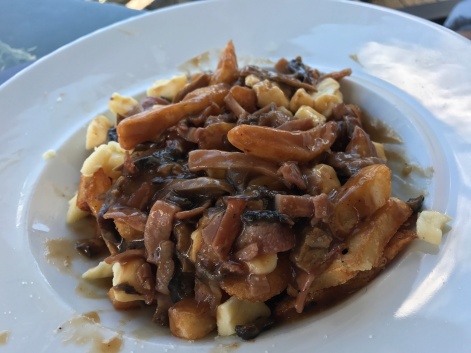 We had our first taste of Poutine that night. I can safely say that we will never be the same. I posted a picture of Poutine for my friends. There were two reactions — rapturous joy for anyone who has ever tasted it, and repulsion from those who had never seen it before. As a well-traveled, adventurous friend noted, “That looks appalling.” What is this Poutine, you ask? French fries covered in gravy derived from some type of hardy animal stock and cheese curds ( the squeaky kind). Some options allow for additional ingredients such as meat, mushrooms and other bits. It is all combines into deliciousness that, by all rights, should send you directly to a hospital emergency room immediately upon completion. Needless to say, we ate Poutine every day.

This was the first trip where I experienced “heavy” gourmet food. We ate meat perfectly cooked and seasoned, which appeared on our plates as hunks on large bones. Restaurants serve hearty stews and soups, such as Canadian split-pea, which I had never tasted, but loved. They offer meats such as bison and caribou, and the portions are not dainty. Maple syrup appears throughout the menu.  You can enjoy maple sauces, maple salad dressings, and desserts, such as maple syrup pie, maple syrup chocolates, and maple syrup bread pudding. In other words, this is food made to be eaten and appreciated in a cold climate. Seriously, in California, they simply don’t make this kind of food. Presumably, we don’t need the extra energy to survive the winter. 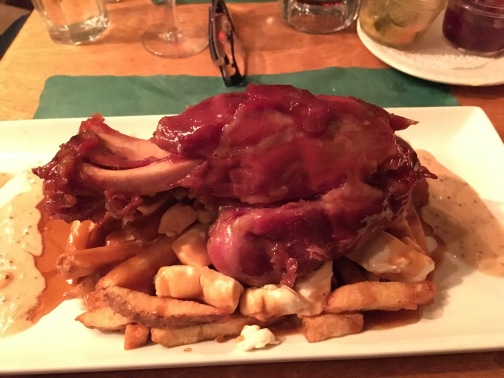 Ham on a bone over poutine

The delights extend to alcohol. I tasted iced wine and iced sparkling cider for the first time. These are refreshing and light beverages, and they are made from frozen grapes and frozen apples, respectively, during January. To say that I am heart-broken that my local wine bar does not sell iced sparkling cider is an understatement.

The people of Quebec presented these food and drink items with little pretense or fanfare. My interpretation was that a visitor should have the good manners to quietly appreciate the outrageous quality of the food and drink in Quebec City, and then mourn the loss of it when they return home.  Preferably from a treadmill.