A Ticket to Ride? Disneyland’s “Star Wars: Rise of the Resistance”

Will You Still Go On Your Trip?

Stonehenge and Avebury: A Day in Neolithic England

Ireland Day Trip: Bicycling on the Aran Islands (Or: How I Almost Killed My Sister)

Ireland: Living on the Edge at the Cliffs of Moher

How to Behave at a California Beach

Travel After Loss: Beauty in the Shadow of Grief 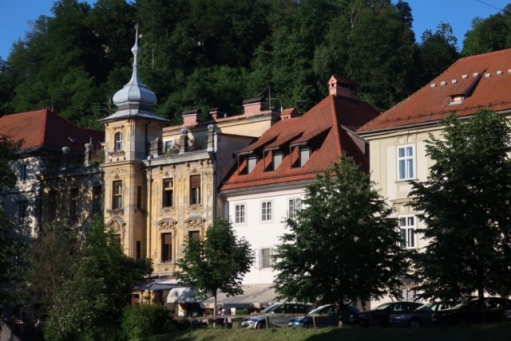 “Um, where is Slovenia?” I received this question often from Americans while planning a trip to Slovenia, a country which was once part of the former Yugoslavia.  The few Americans who nodded their head knowingly actually thought I was going to Slovakia, a country that used to be part of Czechoslovakia.

After a short geography lesson, my friends would then ask in a mystified tone, “Do you have to go there for work?”  Out of necessity, I soon became an unofficial ambassador for this remarkable country.  Slovenia has it all.  It is a small, charming country featuring mountains, lakes, rivers, wine regions, coastal towns, and gorgeous architecture in a small geographic area — approximately 7,800 square miles.   For comparison’s sake, California is approximately 163,000 square miles.

My husband and I followed the full 3-day itinerary below, which does not include half-days for arrival or departure in Slovenia.

The capital, Ljubljana (pronounced loo-blee-ahn-a), is smack dab in the middle of the country, which makes it a handy home-base for day trips.  Ljubljana is simply stunning.  This country was once part of the wealthy Hapsburg Empire, and the architecture should look familiar to fans of Vienna.

Before we go any further, a few observations about the historic center of Ljubljana:

A Fashion Show and Concert in Ljubljana

Ljubljana is compact, flat, and easy to navigate by bicycle.  We rented a bike on our first morning in town and set off for the National Museum of Contemporary History.  The Museum showcases life in Slovenia during the 20th century.  The most fascinating aspect of the museum was how little it covered one of the most important figures in recent Slovenian history — Marshal Tito, Yugoslavia’s former “president for life.”  Too soon, perhaps, to discuss the impact of this controversial, political giant who died only 37 years ago?

We rewarded our intellectual pursuits by grabbing a drink at the top of a popular skyscraper, Neboticnik.  The views, wine, and desserts are well worth the short elevator ride to the top.

View of Ljubljana from Neboticnik

Our next stop was an hour-long sight-seeing boat cruise along the Ljubljanica River, which  provided a different perspective of the city.  As evening drew near, we walked slowly through town and participated in the most important and enjoyable activity in Ljubljana — people watching.

View of Ljubljana from the Boat

Dining out is popular in Slovenia, and reservations are recommended for dinner.  Luckily, I had the foresight to book a table at Gujzina, a popular restaurant that serves Slovenian dishes.  Do yourself a favor and indulge in the traditional food and wine of Slovenia.  Some of the dishes may not look or taste familiar, but that is part of the fun.

Vintgar Gorge and Lake Bled are famous natural sites in Slovenia.  We took the 1.25 hour bus ride from the main station in Ljubljana to Lake Bled.  This was a bit of a dicey proposition as the buses appeared to leave Ljubljana as they were filled up, not adhering to a strict schedule.  Prepare to be patient.

The Travel Information (TI) Center in Bled rents well-used, electric bikes.  The TI gave us a map, and we rode first to Vintgar Gorge.  The map was fairly simple to follow, and the electric bikes helped significantly with the inclines in the countryside.

Scenery on the Road to Vintgar Gorge

Vintgar is a one-mile gorge created by the Radovna River.  People from all over the world visit the Vintgar Gorge to see first-hand its fluorescent blue color.  A path leads along the length of gorge so that you can fully immerse yourself in the scenery before retracing your steps back to the entrance.  It would be the perfect outing except for the crowds.  Particularly irksome are large, slow-moving, tour groups that block your progress on the mostly single-file path.  Take deep breaths, slow down, and ignore the crowds.  Just focus on that impossibly blue water.

If all that exercise makes you hungry, Gostilna Vintgar is a traditional Slovenian restaurant located at the entrance of the Gorge.  The view from the restaurant is scenic and the food was delicious.

We arrived back at Lake Bled and road our bikes on a another well-marked trail around the lake’s circumference.  The lake path was filled with Slovenians and tourists from other countries, but there was plenty of room to maneuver.  Approximately 3/4 of the way around the path (counter-clockwise), we stopped for wine and a piece of the famous Bled cream cake at Cafe Belvedere.  The cafe is located in a historic building where former Yugoslav President Tito once entertained world leaders.  It has one of the best vantage points to look down upon the panorama of Lake Bled.  My husband and I had the place to ourselves for at least half an hour before other patrons arrived.  Absolute bliss. 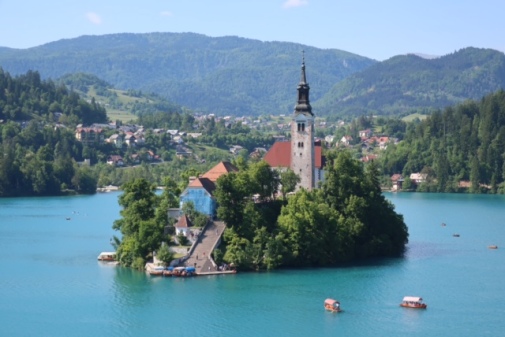 On day 3, we rented a car in Ljubljana and headed out.  Our first stop was Predjama Castle, which was built piecemeal into the side of a cliff from the 13th through the 16th centuries.  The castle has both traditional walls, and walls made out of the cliff itself.  I read a few guidebooks that suggested skipping the tour, because there was nothing much to see inside.  Instead, we were instructed to have a glass of wine overlooking the castle; take a few photos from the outside; and then move along.

Perhaps the tour has improved since the guidebooks were written, or perhaps the guidebook writers were temporarily insane.  The self-guided audio tour turned out to be fantastic and well-worth the price of admission.  Predjama Castle is now our favorite castle in the world due to its unique architecture.  We are not fools, so we did follow the guidebooks’ advice to have a drink overlooking the castle.  Sublime! 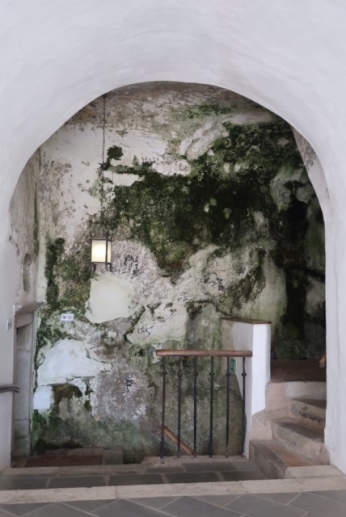 Our next destination was the Škocjan cave system, which is listed as one of UNESCO’s natural and cultural world heritage sites.  My husband and I have seen cave systems in other parts of the world, but we have never seen any underground feature as spectacular as the  canyon in the Škocjan caves.  Tourists are not allowed to take photos in the caves for safety reasons.  The best I can do for you is the picture below of the outside of the caves.  You will just have to go there yourself.  Ensure you have comfortable shoes with a good grip, be prepared to walk a bit, and bring along a sweater or sweatshirt.

Our final stop of the day was the coastal town of Piran on the Adriatic Sea.  For approximately 500 years, Piran was part of the Republic of Venice.  It still retains a heavy Venetian influence in terms of food and architecture.  The center of the town is a medieval maze of  narrow streets.  Restaurants line the seaside promenade and Piran’s main square.  We visited on a hot day, and we should have brought bathing suits and towels with us.  The tourists and locals who knew better spread their chairs and towels on the pavement along the edge of the promenade and spent time in the sea.

Visiting all three of these sites in one day was a tad ambitious.  My advice would be to combine Predjama Castle and Škocjan caves into one day of excursions, and save Piran for a separate day.

Hotel: I stayed in the Junior Suite at the Lesar Angel Hotel.  It is a stylish boutique hotel in a historic building in Ljubljana.  I would highly recommend it.

Car Rental:  The freeways in Slovenia are well-marked and maintained, so driving is easy in Slovenia.  I had read many posts that warned us to purchase a “vignette” sticker for the toll roads at the first gas station we encountered or face heavy fines.  However, the vignette was included in our rental car price, and required no further action from us.

Second-Hand Smoke: If you are sensitive to cigarette smoke, then research second-hand smoke in Ljubljana.  After returning home, I discovered that Slovenia consistently ranks near the top of the lists in tobacco use per capita by country.

Note: I received no incentives for any recommendation on this page.  My opinions and travel costs were entirely my own.