I had grave doubts about visiting Hitler’s Eagle’s Nest (Kehlsteinhaus).  It is situated at the top of the Obersalzberg, a mountain resort area above the village of Berchtesgaden, Germany.  The Nazis built the Eagle’s Nest as a retreat for Hitler where he could entertain, impress, and intimidate world leaders.

In researching my trip, I stumbled across a few reviews that implored tourists to boycott this spot.  The writers felt that the Eagle’s Nest only serves to glorify Hitler and encourage those who continue to share his horrific world views.

After much introspection, I decided to travel to the Eagle’s Nest and the Obersalzberg.  The entire area was an important stronghold for the Nazis, and it provides important context about the terrible road to World War II.

In deference to concerns about the Eagle’s Nest, I signed up for a serious tour that dove deeply into the history of the region.  Eagle’s Nest Historical Tours provided well-researched information about Berchtesgaden and the Obersalzberg, which are located near the border of Austria and Germany.

It is hard to exaggerate the allure of this landscape.  Remember the opening scene of The Sound of Music where Fräulein Maria twirled around a mountain singing, “The Hills are Alive?”  This scene was filmed near Berchtesgaden.  Understandably, it was a popular spot long before the Nazis appeared. 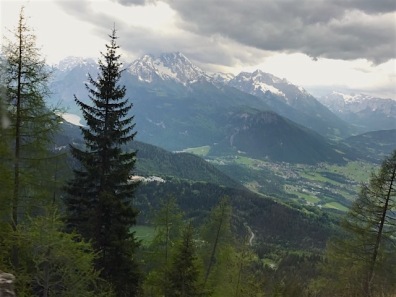 Hitler bought and renovated a farmhouse on the mountain called the “Berghof” in 1933.  His henchmen took over the rest of the mountain by either buying out the inhabitants or forcibly removing them.  Once they had control of the mountain, the Nazis built a compound of administrative facilities, barracks and worker housing.  Party elites such as Hermann Göring and Heinrich Himmler also had homes on the Obersalzberg.

This was not simply a “weekend retreat.”  It was such stunning and well-protected territory that Hitler and the Nazis made the entire mountainside one of their primary operating bases.  Hitler spent considerable time here with Nazi party officials making important decisions pertaining to the future of Germany and the rest of the world.

Underneath the Obersalzberg lies an extensive network of bunkers that were built between 1943 and 1945 as air raid shelters and an underground headquarters for Hitler.   The complex contained offices, storage, and living areas to be used in case of allied invasion or aerial bombardment.

Stairway from the Bunkers

After our tour of the bunkers and the mountainside, we drove to the official shuttle stop for the Eagle’s Nest.  Visitors  reach the building by taking a bus fitted with special brakes to the very top of the mountain, where one finds spectacular views of the valleys below.

The Eagle’s Nest was the least interesting, but most beautiful, part of the tour.  As Hitler lived lower on the mountain in the “Berghof,” the Eagle’s nest was used solely to entertain guests. There were no living quarters on site.  Records show that Hitler himself only visited the Eagle’s Nest 14 times.

At the end of the war, the allies destroyed the “Berghof” and most of the Nazi buildings on the Obersalzberg. They also had planned to obliterate the Eagle’s Nest.  The Allies did not want to leave standing any potential pilgrimage site to Hitler.  The German government convinced the military to leave the Eagle’s Nest intact.  They wanted to reclaim it for recreational use as part of the transition to a post-war world.

As a result, the Eagle’s Nest does not glorify Hitler.  By design, there are few historical references there.  The site is controlled by a charitable trust.  A restaurant operates in the building, and many people simply have lunch, drink beers, or hike on the mountain.  At the base of the mountain is a resort and spa to encourage the tourist industry.

The day I visited, people from all over the world and from many different races, religions, and ethnic backgrounds stood on top of the mountain together enjoying the view.  The Obersalzberg is once again a place of beauty — as it was before the Nazis invaded the mountain.

Getting There: We traveled to Berchtesgaden from Salzburg via the 840 bus at 10:15 AM.  As you exit the Salzburg Hauptbahnhof, cross the street and turn right.  The bus stop will be on your left, kitty-corner to the Hauptbahnhof.  I am including a picture of the bus stop below, because we accidentally walked past it.  The ride takes 45 minutes, and you can buy a round-trip ticket from the bus driver.

Tour: The Eagle’s Nest Historical Tour departs Berchtesgaden and lasts approximately four hours.  Due to weather on the mountain, the tours only take place from mid-May through October.  This tour provides historical information that would be difficult to gain on your own.  The tour guides are particularly good in helping visitors understand the scope of the Nazi operation on the Obersalzberg.

Lunch:  We arrived in Berchtesgaden at approximately 11:00 AM, and our tour did not depart until 1:15.  By design, we had enough time for a delicious lunch at Gasthof Neuhaus in the charming village of Berchtesgaden.  The bus from Salzburg drops off below the village center.  We took a short cab ride up the steep road to the restaurants and shops, and then we walked back down to meet our tour.

I have no affiliation with any company listed in this post.  I paid for my tour and food, and I enjoyed them.