Ireland: Living on the Edge at the Cliffs of Moher

Towering hundreds of feet above the ocean, the Cliffs of Moher are a stunning natural feature of Ireland’s west coast.  They also can be deadly.

Appropriately enough, the day I visited the Cliffs began on an ominous note.  My husband was felled by food poisoning back at our hotel.  After ascertaining that he would probably live, I ditched him to join a day tour of the Cliffs.

As we approached the Cliffs on teeny-tiny roads, I received my first taste of mortal peril.  My bus driver, Gerry, spotted a larger bus coming from the other direction.  It seemed impossible that these two gigantic vehicles could pass each other unharmed in the small space allotted.  The buses stopped in a high-stakes stand-off, engines revving.  Tensions rose.  My driver declared, “He is an idiot!”   We, the loyal bus passengers, cheered wildly.  As Gerry left to confront the enemy driver, our bus erupted in shouts of “Go get ’em, Gerry!”

Example of a Teeny-Tiny Road in Ireland.  Good for Cows.  Not Good for Buses.

We emerged victorious from this nail-biting encounter, and arrived at the Cliffs of Moher.  As we left the bus in front of the visitor center, our driver cautioned us to stay on the official paths.  If we didn’t, he said, “Just remember to look to your right as you fall.  The view is better on the way down.”  We all laughed at his delightful, Irish sense of humor.

The visitor center exits onto well-marked paths overlooking the cliffs.  Here is where you find your first clue that the Cliffs may be your last outing EVER: 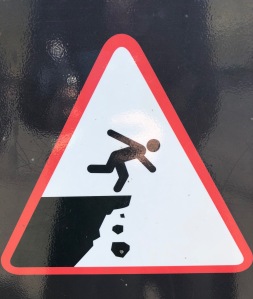 Universal Sign for Falling Off the Cliffs of Moher

I thought it was the most FABULOUS use of a stick figure that I had ever encountered.  I also was a bit taken aback.  I nervously continued on my way, and then I saw the next sign:

Universal Sign for “We Are Not Kidding! You Could Really Hurt Yourself Here.”

At this point, one begins to suspect that the Cliffs of Moher has seen a few too many, tragic, selfie-stick incidents.  In fact, just a bit further up the path, I discovered a monument dedicated “In Memory of Those Who Have Lost Their Lives At the Cliffs of Moher.”

Until now, the signs were just interesting in a scary, sad way.  The views were stunning, and I happened to be there on a perfect weather day.  As my driver stated, “On a scale of 1-10, this weather is a 15.”  I assure you that there wasn’t a more picturesque place on the planet, and I was happy as a lark on my solo venture.

Then, I read these signs:

Extreme Danger at the Cliffs of Moher

Visitors had a choice.  One could either continue on a path separated from the edge of the cliff by a slab wall, or climb over the wall to walk along the edge.

Choices at the Cliffs of Moher

The signs were pretty clear that you were NOT supposed to climb over the wall.

Do Not Climb Over the Wall

A bit of background would be helpful at this juncture.  I am a rule follower.  My husband likes to say that I make up rules even if they don’t exist.  He is the intrepid explorer; the one that approaches rules as a challenge to be overcome. Needless to say, I was delighted that he was sick at the hotel.  Otherwise,  within 30 seconds, he would have climbed over the wall, scampered over the edge, and fallen to his death. 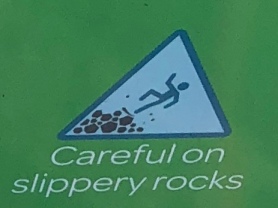 After only a short distance, my path became muddy and full of puddles.  Insects buzzed around my head, and I looked enviously at those frolicking on the dry, pretty ground next to the ocean’s edge.

My path was quite narrow.  On one side of me was a slab wall, and on the other side was an electrified, wire fence.   I know this, because a sign told me.  I read the sign while standing in a pool of slippery, muddy, water.  I am no scientist, but this combination of circumstances seemed less than ideal.

After a prolonged inner struggle, I decided that I was doomed no matter which path I trod.  So, I jumped the wall.  Me!  I was literally living on the edge.  Breaking all the rules.   Living out loud.  I spent the rest of the afternoon outside the wall soaking up the glorious scenery.

This would be a much better story if, in the end, I realized that life is meant to be lived audaciously.  That travel changed me, and I am now a rebel in search of a cause.  Sadly, it was a once-in-a-decade kind of day for me.  I just feel bad my husband missed it.

*Disclaimer: You always should obey official advice. Do not follow my obviously irresponsible example.  Remember the falling stick figures!  See, I told you I haven’t changed.

To read more about my travels to Ireland, please see:

Travel After Loss: Beauty in the Shadow of Grief

Ireland Day Trip: Bicycling on the Aran Islands (Or: How I Almost Killed My Sister

This is a text widget. The Text Widget allows you to add text or HTML to your sidebar. You can use a text widget to display text, links, images, HTML, or a combination of these. Edit them in the Widget section of the Customizer.
Loading Comments...
%d bloggers like this: