Denmark, like most European countries, has a selection of beautiful castles.  As an American, I find it difficult to resist popping into at least one castle on a trip.  Why?  We don’t have castles, so they are endlessly fascinating. More importantly, they are usually important historic and cultural sites.

Did I happen to mention that I LOVE the Christmas season?  Really, my love of Christmas verges on ridiculous.  Alas, my husband eyes me suspiciously when I talk about visiting castles and even more suspiciously when I mention that a castle is having a special “Christmas Weekend.”  However, I found him cheerily by my side for a day trip to the small town of Helsingor, Denmark, to visit Kronborg Castle. 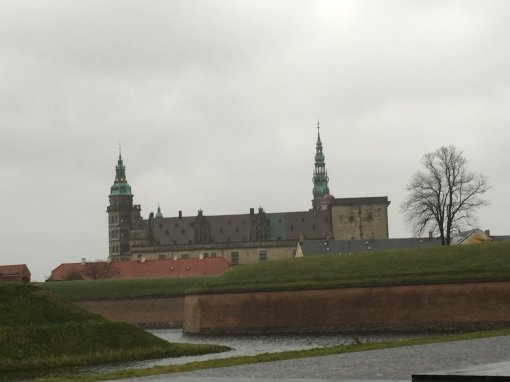 Kronborg Castle on a Dark and Stormy Day

A UNESCO World Heritage Site, Kronborg is a Renaissance Castle built in the 16th Century.  One of its many claims to fame is that was the setting for Shakespeare’s Hamlet.  It also has a dark dungeon-like area, which was the pivotal selling point for my husband.  (That last sentence is a literary device known as “foreshadowing.”)

After a short train ride from Copenhagen, we reached Helsingor.  The town was dressed up in Christmas finery, and we passed by a choir singing carols for us. Yes, that kind of town. We arrived at the castle, which was also decorated for christmas–so much so that it was hosting a Christmas fair that day.  Simply lovely thus far and all according to plan. 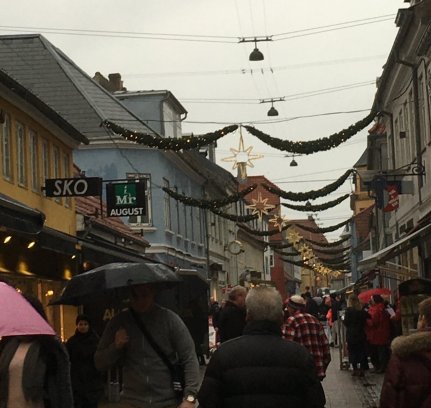 A Christmas Crowd in Helsingor

Then, we made our way to the dungeon-like area. At this point, let’s remember that most countries in the world, in my experience, do not follow the American habit of cocooning  visitors in bubble-wrap to protect them from every ill that can befall them.  It is quite refreshing really.  In the case of Kronborg Castle, there was one arrow on a wall pointing down some steep stairs, and responsibilities to visitors had been satisfied.

We entered into a very dark area, which was sparsely lit by some dim gas lamps. There were many sections with no lights whatsoever.  I gained a true appreciation for the experience of castle prisoners back in the day. Thank goodness for the cell phone flashlight app, or my husband would have completely missed the bats that live under the castle.  Bonus: The bats like to fly around a bit after you have woken them up with your flashlight app.

At this point, I felt that my visiting-a-dungeon fantasy had been fulfilled.  My husband was excited to find more bats.  I waited at the exit for him.  As we left the extensive dungeon-like area, I heard the screams of other visitors who were making new bat friends.  I recovered at an adorable half-timbered restaurant, while my husband reveled in the “best castle EVER” memories.

In conclusion, my husband and I would both HIGHLY recommend visiting Kronborg Castle in December.  We just have very different reasons for doing so.

You may read about my other Christmas journeys at:

Christmas Season in the Alsace: A One-Week Itinerary

A Christmas Hike in the Alsace: Riquewihr to Ribeauville

New York at Christmas: An Itinerary

The Nantucket Christmas Stroll: A Festive Weekend in New England