The Nantucket Christmas Stroll: A Festive Weekend in New England

“Go faster, Santa! Faster, faster!” This plea came from a young boy who was overjoyed at the pending arrival of the Big Guy via a Coast Guard vessel. There were thousands of other adults and children crowded onto the Nantucket Island wharf who obviously felt the same.  Led by the town crier, we had all paraded to the wharf from Main Street Street to greet Santa.  Seriously.  We really did this.

Going to the Wharf to Greet Santa

I called my three siblings over the summer and asked them to go to the Nantucket Christmas Stroll with me the first weekend in December.  I am a big fan of both Christmas and winter travel, as noted in one of my recent posts, It’s Winter: Start Traveling!.

My brother, sensing a trick, incorrectly said, “Nope. Sounds like a girl thing.” My sisters immediately volunteered to go.  It wasn’t until months later that my little sister asked exactly where Nantucket might be and what was involved in a “Christmas Stroll.”

According to the Nantucket Historical Association, this island off the coast of Massachusetts was first colonized in the 1600s.  And, it has the historic homes and cobbled streets to prove that the community dates back hundreds of years.

The Christmas Stroll was created as a way to help local businesses attract Christmas shoppers over 40 years ago. It has become a popular annual tradition involving shopping, decorations, activities, eating, and fun.

Prior to the trip, I had informed my sisters that elaborate Christmas outfits would be required each day. I made this up to torture them, but I figured it was probably true. Thankfully, many “strollers” came decked out in their outrageous holiday finery. I am referring to reindeer hats, snow globe headbands, Christmas light necklaces, matching Christmas sweaters, Christmas suits for men, etc. 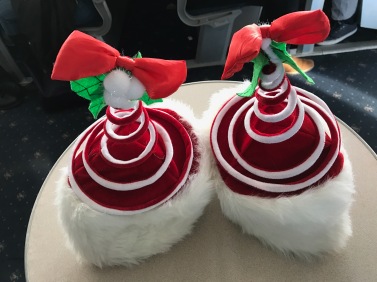 Nantucket is a wealthy, New England, vacation spot.  I have visited at other times of year, and it is the epitome of taste and refinement. However, the stroll appears to be an opportunity to let one’s hair down a bit. In fact, my sister received many compliments for her bright, Christmas leggings.  She  joyously told the inquiring, well-to-do  women that they could procure a pair for themselves at Walmart for only $6.

I found these contrasting versions of Nantucket scattered throughout the weekend. Beautiful landscapes, gentility, and family-friendly charm lived in harmony with alcohol-inspired, festive, merry-making at every turn.

Our first night in town, we bought tickets to the Annual Holiday House Tour. During this event, eight historic Nantucket homes were opened to the public for charity.  Each of the homes appeared to be professionally and tastefully decorated for the holidays.  We put booties on our shoes to protect the immaculate floors, and then enjoyed our peek into the privileged life of the Nantucket elite.

Immediately preceding the house tour, though, my younger sister and I had a festive holiday cocktail near Main Street.  I will not share the video I took of an outdoor tent full of adults singing booze-fueled  carols together, but it does exist.

We ended the evening at the Whaling Musuem, which hosted the Festival of Trees. I exited the museum amazed and pleasantly surprised by the Christmas display I had seen, which consisted of approximately 80 trees each beautifully decorated with a unique theme.

My older sister seemed to have visited a different museum entirely, even though we had walked an identical path through the same building. She hadn’t paid any attention whatsoever to the Christmas trees.  She was, however, impressed by the museum’s gigantic sperm whale oil press and other oddities of whaling history.  I still have no idea what she was talking about, but she was enthusiastic about it for the rest of the weekend.

Obviously, the Nantucket Christmas Stroll has a little something for everyone.  Whether visitors came with children, groups of lively friends, or sisters, we all had one thing in common.  We hoped for  Christmas magic in a historic setting, and we wanted to experience it with the people we love most.

View from the Nantucket Wharf

You may read about my other Christmas journeys at:

Christmas Season in the Alsace: A One-Week Itinerary

New York at Christmas: An Itinerary