Millions of people in Southern California recently saw an unidentified flying object in the sky.  As you can imagine, everyone approached the situation calmly and logically, assuming that all would be well.

Ha, ha.  No, they didn’t.  Mass panic ensued.   Millions of people freaked out.

I was minding my own business, battling the wretched commute in Southern California.  As my car crawled closer to home, I saw what appeared to be a sky-writing plane trailing smoke as it ascended.  We see these planes almost every day at the beach, so they are not an unusual sight.  It seemed a bit stupid that someone would commission a sky-writing plane in the dark.  Californians live and let live, though, so I didn’t judge this situation too harshly.

I noticed that the path of smoke was becoming brighter and expanding rapidly.  At this point, I  considered the horrifying possibility that I was watching a plane implode.  A glowing piece of the flying object started falling, but it descended in a slow motion that seemed incongruous with a falling plane.  Clearly, I had no idea what actually was happening.  I just knew this situation wasn’t normal.  My heart rate quickened, and I started getting scared.

It suddenly dawned on me that I, the driver, hadn’t looked at the road in several minutes.  Seriously, it was like watching one of those movies where the characters are talking intensely with each other in a car, and you think, “In real life, these characters would die in a car crash, because no one is looking at the road.  Who is directing this scene?  This is ridiculous.”

The news reported several fender benders on December 22nd, including a multi-car pile-up on the freeway.  Those drivers did not have my unexpected talent for driving while staring at the sky.

More sensible folks had pulled off the road.  The streets approaching my house were filled with stopped cars idling with their hazard lights blinking.  People were standing in the middle of the street or huddled in groups on their lawns, pointing up at the sky. 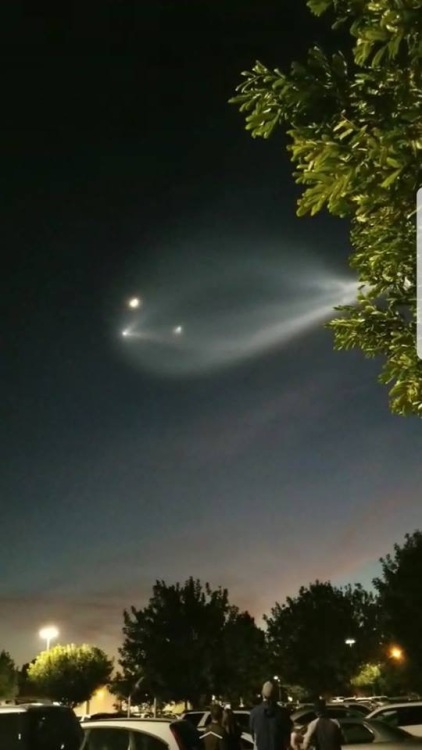 I arrived home and consulted my husband.  I depend on him to allay my many fears and anxieties in this life with a dismissive roll of his eyes.  He utterly failed me at this critical juncture.

Maureen: “What the hell is that?”

Maureen: “Why is there a rocket in the sky?”

Maureen’s Husband: [Patiently] “Don’t worry.  It has to be one of ours.  It looks like it is heading away from us towards the ocean.  Towards Hawaii.”

Maureen: “WHY ARE WE SHOOTING A ROCKET TOWARDS HAWAII?”

He did not have time to answer me.  Carloads of perfect strangers kept stopping in front of my house to ask my husband what was happening.  I told you–he is a beacon of calm and authority in a sea of crisis.

I entered the house while my husband addressed the nervous public.  I firmly believed some type of military action was starting over the Pacific.  The only solution was a glass of wine.  Obviously.

This is when I decided to have a glass of wine.

In the meantime, Google finally revealed that SpaceX, a private company founded by Elon Musk, had launched a rocket in Southern California at 5:27 pm.  It was a planned launch.  Everyone was supposed to know about it in advance, except, apparently, everyone who lives in Southern California.

I later found out that much of the populace thought we were facing an alien invasion.  This seems WAY more interesting than imagining a military action.  I feel robbed that I did not experience the alien invasion scenario.

Ironically, I am a huge fan of space travel.  I have always wanted to see a rocket launch.  Despite my terror, it was a great thrill to see one.  I now have subscribed to every available SpaceX social media feed.  Those brilliant bastards are not going to surprise me again.